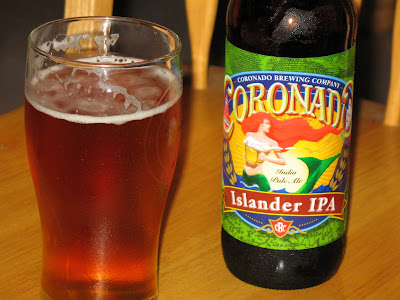 The Coronado Brewing Company is a small brewpub in (you guessed it) Coronado, California. They have regional distribution of their beers, primarily in 22oz. bottles, and offer selections such as an "Islandweizen" Heff, "Coronado" Golden, and (most exciting to me) two different IPA's: the "Idiot" IPA (described as an 'all-natural' IPA with a hefty 8.5% ABV and 3 lbs. of hops/barrel -- I hope to have a review of this one for you as soon as I can get my hands on a bottle), and the "Islander" IPA.
The Islander IPA, described as a 'West Coast IPA' by their website, has a solid hoppy bite, but was surpisingly clean in its finish, despite a high alcohol content (7.5%), which in my opinion can sometimes lead to an overly sweet taste at the end. A full mouth-feel and a full flavor made my first few sips surpisingly good. The only real downside of this beer came as it warmed up from fridge-temperature to room-temperature, when a slight aftertaste delivered. While not overly unpleasant, in did detract a little from the bright hoppiness and clean taste this ale featured early on. The verdict: Good, solid, very hoppy. Keep it cold and at it ranks up with the top SoCal IPA's; let it warm up and it loses a little bit of luster, although remains very decent.
Posted by Dennis at 9:48 PM