The D-Train in Fresno. Next stop, LOOGY-ville?

Chatting with a friend the other day after news broke that the Giants had signed Dontrelle Willis to a minor league contract, I speculated that they could be looking at him as a potential lefty reliever.  As El Lefty Malo pointed out, I was right.  Dontrelle will report to the bullpen in Fresno, and will likely try to rebuild his career as a LOOGY.  If he's successful (and his numbers against lefties are decent this year), he could be an insurance policy in case Dan Runzler's injury keeps him out longer than expected.  Willis is a Bay Area native, and at one point was one of the most entertaining and likeable pitchers in the league.  Here's to hoping he makes it back to the show, somehow.
Posted by Dennis at 11:46 AM No comments:

Not sure what's going on with the site (for instance, the
Alec
Stephen Baldwin video is cut off on the right hand side, as is the Twitter widget on the sidebar.  This is possibly a template issue, or possibly a browser issue as I've been too lazy to check on another machine thus far.  Fortunately, the school year ends in 13.5 hours, and I should have a little more free time shortly.

UPDATE:  Being my stupid tinkering self, instead of going to bed early in preparation of an early after a long weekend of revelry, I decided to fuck around with the templets.  On the plus side, grabbing this new template seems to have fixed the spacing issues.  I'll try to pretty it up a little bit sometime later this week.
Posted by Dennis at 10:15 PM 1 comment:

Testing out the stuff.
Posted by Dennis at 10:36 PM No comments:

If you haven't seen it yet, Detroit Tigers' pitcher Armando Galarraga was just robbed of a perfect game by first base umpire Jim Joyce.  With 26 perfect outs in the book, Cleveland batter Jason Donald hit a grounder to the first baseman, who hesitated and then threw to Galarraga covering the base.  After a flinch, Joyce called the runner safe, even though the ball beat him to the bag by at least half a step.   Galarraga finished off the game with the next batter. 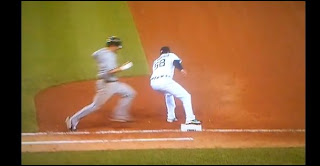 To my mind, this situation (or travesty, or disaster, or farce, or....) raises two main questions:  (1) CAN MLB commissioner Bud Selig reverse this call, and award Galarraga the spot in history he seems to deserve? And more interestingly (2) SHOULD Selig reverse it?
I'm going to leave #1 alone; I don't know exactly how far the long arm of Selig's power reaches.  Number 2, though, that's something I might have something to say about (me, opinionated?).  My first reaction (what was the title of the post?) is ABSO-FUCKING-LUTELY!  Fire that ump, rewrite the game log, call the batter out!  The most important thing is to get it right, goram it!
Then I thought, and I read some of the conflicting opinions, and I reconsidered a little.  What kind of can of worms would we open by changing this call?  Are we gonna go back and say that Holliday never touched the plate?  Was A.J. Pierzynski out?  Are we gonna go all the way back and give the 1985 World Series to Saint Louis?  While we're at it, can we go back and declare the Pierzynski-for-Nathan-et-al trade void (please)?  Where does it stop?
Ultimately, I think this was a terrible call, and I feel terribly for that pitcher (not to mention the ump -- he has to live with incompetence as his baseball legacy).  That said, that's a slippery slope, and I think once we start retroactively changing umpire calls, it's going to be real tough to figure out where to stop.  Instead, I think this has to be the impetus for an increase in the implementation of instant replay, so that NEXT time (and there WILL be a next time) they can overturn it within the game, rather than ex post facto.
Posted by Dennis at 9:09 PM No comments:

A campaign I can get behind!

So I finally finished it.  California (with a big assist from the federal government via NCLB - thanks Dubya!) has made the process of getting into the teaching profession a long and painful one.  The last major hurdle facing me as I try to finish my credential was an overbearing, overthought, overly long final assessment called the PACT.  It's been looming on my horizon for months (years, ev-en!).  Well, it's done (assuming, of course that I passed).  I turned in my PACT - that glorious, 96-page pile of shit - on Thursday, and am finally free.  My credential program is just about done, too.  One more class, an exit interview, an a certificate ceremony, and it's all over.  Will I use some of that extra free time to blog more?  Who knows.
Posted by Dennis at 12:12 PM No comments:

Hall of Fame voters are idiots.

Last year one dumbass (Corky Simpson) decided he would stop Ricky Henderson (Ricky freakin' Henderson!) from being unanimous, not because he didn't think Ricky was worthy, but because he's 'just not a Ricky guy'.  This year, they elected a candidate who's borderline (and that's being generous -- seriously, check out his career .323 OBP), and failed to elect Robby Alomar or Barry Larkin, two guys who should be automatic.  They also continued their brainless exclusions of Bert Blyleven and Rock Raines.